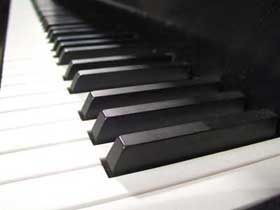 As with many musicians, I started out early in my life playing music. My mom began giving me piano lessons at the age of six. I was on a strict routine that invloved at least thirty minutes of practice time each day and a new lesson each week. If I was to move forward with the lessons, I had to be able to play the piece from the previous week's lesson to near perfection. Otherwise, I was required to double up the following week by continuing practice of the previous week's piece and the current week's piece. For a child eager to move on and become the next Mozart, this wasn't very pleasing. Yet, it instilled a work ethic and strive for perfection at an early age. Although God doesn't require us, as christians, to be perfect, He does require us to give our very best for Him. My parents knew that and began teaching me these life lessons early on.

I continued taking piano lessons until I was about fourteen. It was at this point that I thought piano wasn't "cool" anymore. I was heavily into sports, and I decided to let those things take up the majority of my time. This was a little difficult for my mom who insisted on my continuance of the lessons. But, due to my lack of practice time and non-improvement in piano skills, she eventually gave in and let me go on with my fun, leaving piano behind. It wasn't until nearly ten years later that I had the desire to start playing piano again.

The song that renewed my interest in playing piano was the song "If You Want Me To" written by Ginny Owens. There was a version of the song that she did live at the Hard Rock opening in Orlando, FL, and it had been playing on the radio for several weeks. This song really moved me to take a step of faith into God's will. I took the initiative to find the sheet music to the song and signed up to sing at my church. This song was the first song I had learned to play on the piano in over ten years. I performed this song while singing at my church after only two months of practice. God really showed His power in my life that day.