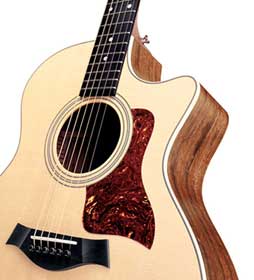 I can still see the film clip running through my brain of my sister and I jamming away on the front porch of our trailer. We were probably around three and four. My sister was on the drum kit that I had gotten for Christmas, and I was playing a Regent junior acoustic that my dad had when he was a boy. We still have that guitar! This is the first memory I have of playing the guitar. There were no chords, lead solos, or strumming patterns of any kind, but we were having the best time making music.

Jump forward about ten years. I think I was a sophomore or junior in high school when I started playing the guitar. I never had any lessons, just a chord book and a bright red Peavey electric my uncle had loaned me to learn how to play on. I didn't have an amp of any kind, so I swiped my sister's Karaoke machine to get the sound out. I just plugged straight into one of the 1/4" mic jacks and played away. You'd be suprised at the kind of sounds you can get out of one of these! I learned very quickly and it wasn't too long after that I began practicing with our music minister and some other youth at our church. Our music minister played acoustic guitar and sang, I played the electric, a friend in the youth group played my drum kit, and my sister and another girl in the youth group sang. We played a couple of times at our church, and then we got our big break. We were invited to play at an area-wide youth rally at another church. I was very excited. This was my first every real gig! However juvenile we may have sounded, it is still a memory that has stuck with me.

Around that same time, we got a new youth minister at our church (different than the one mentioned in an earlier section). He was not a very musical person, but his wife played the guitar. We began playing and leading music at the beginning of every youth service on Wednesday nights. This was a building time for me. I did not know very many worship songs, and she kind of showed me the ropes of worship leading. This continued through my senior year of high school. Then came time for me to graduate, both from high school and the youth group. This was the end of my worship leading for several years, but not my guitar playing. While in college I continued to play guitar in my apt. As luck would have it, one of my roommates played the guitar, too. He had several tab books for many of the popular bands at that time. I would borrow His books one at a time and practice my favorite songs from them. Even though they weren't christian artist, I was still building my playing skills. This would turn out useful many years down the road.

I returned home from college after the first year for summer break. I never really got to play much after that. My time got consumed by other things and I kind of lost interest in playing the guitar due to a change in my musical tastes. So, I gave the guitar back to my uncle. I figured he would get more use out of it, since I wasn't playing it at all.

Now, jump forward about three years. I had been working full-time for two years and was making a pretty good amount of money for a person my age. This newfound wealth was giving me the opportunity to expand my drum kit at church, so I had been visiting some music stores fairly often. I saw in an ad for a music store near where I worked that they had some specials on guitars. I thought this would be a great opportunity for me to own my own guitar in case I decided to start playing again. I bought a pretty nice Squier electric with three pickups, a five-way switch and a Floyd Rose tremelo bar at an amazing price. But, I never really started back playing.

Not long after that, my musical tastes began to change again, as well as my heart. I was beginning to come back to God and His will for my life. I began to have the desire to play worship songs again, but I didn't feel like the electric guitar would do the job this time. I started looking around for acoustics, playing every one I could get my hands on. I was in the market for a beginner's 6-string, but fell in love with the sound of a high-end Ovation 12-string. No matter how hard I tried, I could not resist this guitar. So, I bought it.

The first song I performed with this guitar was "Open the Eyes of My Heart" by Paul Baloche. This was done as a solo performance. Since then, I have become the lead guitarist and a vocalist for a worship band at my church. I have been playing the Ovation guitar with this band ever since, though I have added many others to my arsenal including the beautiful Taylor you see me holding in my promo pictures. I now have five guitars (six if you count the old Regent which is in the closet). My guitar playing skills keep improving every day, and I look forward to continuing playing for God in my ministry.