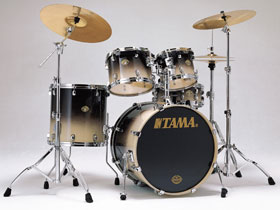 My drumming experience starts off at a very young age. I received my first set of drums for Christmas when I was only three years old. My parents still have some old 8mm reel-to-reel video footage of me banging away on these things. But, this was just a junior set, and I wasn't at all talented by any means. However, once I learned to read music and got a feel for timing and things of that nature through my piano lessons, I developed a natural ear for rhythm on the drums.

As I fazed out of piano, I began to have a desire to play drums again (I use the word "again" very loosely). My uncle, Mom's brother, had played in a band during the 80's, but they were not together anymore. He had a standard set of Tama Swingstars sitting in my grandparents barn collecting dust, hay, cobbwebs, manure, and all sorts of other crud. So, he decided to hand them over to me to use to practice. I know this wasn't what my folks wanted to hear, but it sure was for me. I was excited to have the chance to play. I practiced spuratically in my garage where they were set up. I would take a CD player out in the garage with a pair of headphones and try to learn the drum beats to various songs I liked. This worked pretty well and I was able to learn alot from listening to these recordings with my musically-inclined ears. I was also given a beginner's instructional video which helped, as well.

As I grew confortable playing and my parents could finally make some sense of what they heard in the garage, I was asked to start playing for church. I was very reluctant to take on this task. Due to my perfectionism, I always had a fear of messing up, even the slightest bit. And, even after I finally agreed to start playing, I would still play very quietly, just in case I flubbed up somewhere. Mistakes are always less noticeable when they are quiet. Then, as we were looking for a new youth minister, we hired one that played the drums, too. I was able to learn some things from him I couldn't have learned through watching a video or listening to CDs. My confidence began to grow and I slowly started getting louder.

Not too long after that, it was time for me to go off to college. So, I stopped playing drums at the church. A couple of years later, after I had returned from college, we began to develop a collection of musicians at our church. It was requested that I begin playing drums again. I agreed under the condition that other musicians begin playing, as well. So, from then on out, we have had a small orchestra at our church. We grew very quickly and peaked out at around 18 musicians. It has been up and down ever since, but we now have about 8-10 consistently. Unfortunately, some of our musicians do not have the funds to purchase their own instruments, and neither does our church. Otherwise, we could have a slightly larger number. If you feel like God is pushing you towards donating an instrument or two to our ministry, please contact me ASAP and I will put you in contact with those who can receive your gift!